skip to main | skip to sidebar

In case you missed Fearless Dawn:Shorts in the comic shops! Fearless Dawn:Swinsuit Special will ship soon!--But you can always support the Kickstarter too! 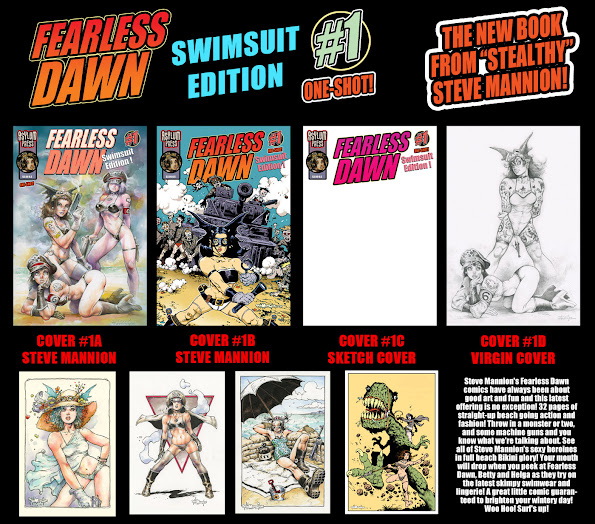 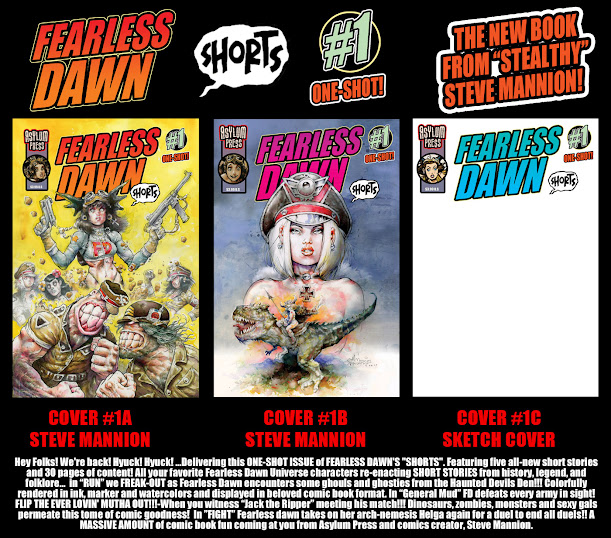 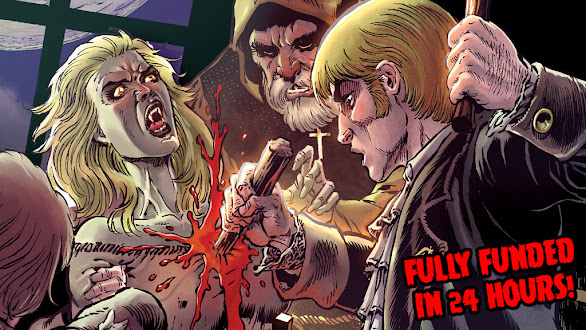 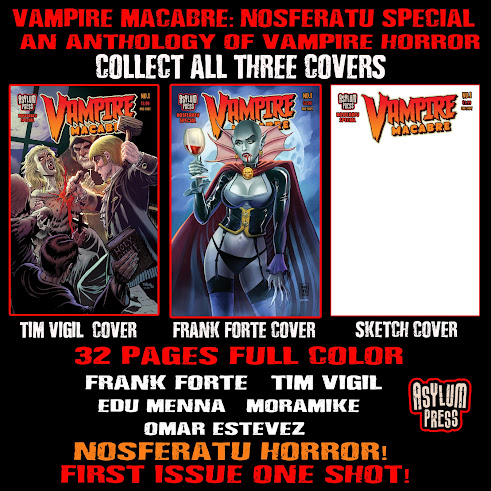 Are you a fan of the shock/terror storytelling of Eerie and Creepy magazines? DC Comics’ The House of Mystery, House of Secrets or The Twilight Zone or Black Mirror TV Shows? Do you like the horrors of EC Comics’ Tales from The Crypt, Black Cat Mystery, and other pre-code horror comics? If so, this collection of anthology horror comics is for you. Asylum Press brings you four issues of insane, twisted, gory pages that will keep your eyes bleeding until the very end. 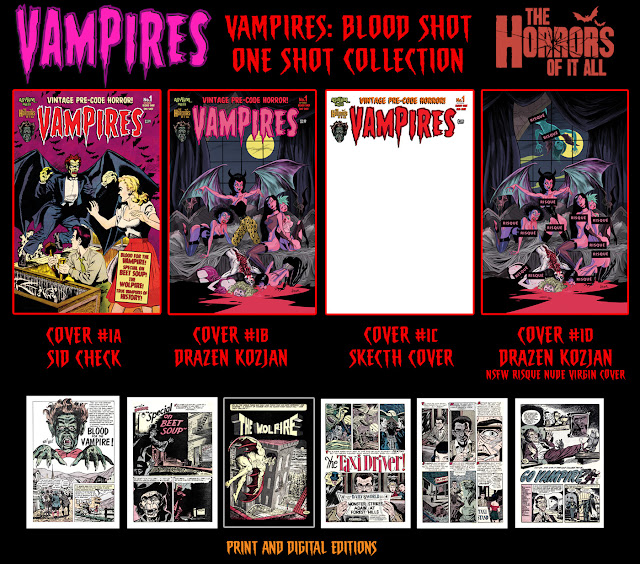 Hot on the bloodied heels of Asylum Press's horrific hit, VAMPIRES #1, comes this second round of vicious vampiric insanity, as The Horrors of it All's, Mr. Karswell cracks open another coffin-loaded collection of foul fanged, bat winged terrors from the Golden Age of pre-code comics! Six sinister tales to assault your salivating senses as you're transported back in time to face a rather bloodthirsty ancestor in "Blood for the Vampire!" Legendary artist, Mel Keefer asks you if there's anything worse than a "Special on Beet Soup?" And then Harry Lazarus unleashes one of the most insidiously mad monster mash-ups ever in, "The Wolpire!" Plus, a "True Vampires of History" lesson, a shivery superb cover by Syd Check, additional crypt classics from Harvey, Stanley Morse, and lots more!

Asylum Press brings you a horrific blood thirsty collection of all-new Vampire tales. Featuring an international cast of artistic talent. Frank Forte delivers another installment of our favorite vampire queen NOSFERAZIXX! Frank Forte and Edu Menna revive ZEPHIRA: THE NIGHT KILLER for another round of post-apocalyptic vampiric action. And lastly, Tim Vigil (Faust, Gothic Nights) gives us "Feline Fatale" A seductive female Vampire wakes up from her coffin and prepares to walk the night, she is interrupted by a prowling black cat. A must for all vampire fans!

Steve Mannion's Fearless Dawn comics have always been about good art and fun and this latest offering is no exception! 32 pages of straight-up beach going action and fashion! Throw in a monster or two, and some machine guns and you know what we're talking about. See all of Steve Mannion’s sexy heroines in full beach Bikini glory! Your mouth will drop when you peek at Fearless Dawn, Betty and Helga as they try on the latest skimpy swimwear and lingerie! A great little comic guaranteed to brighten your wintery day! Woo Hoo! Surf's up! 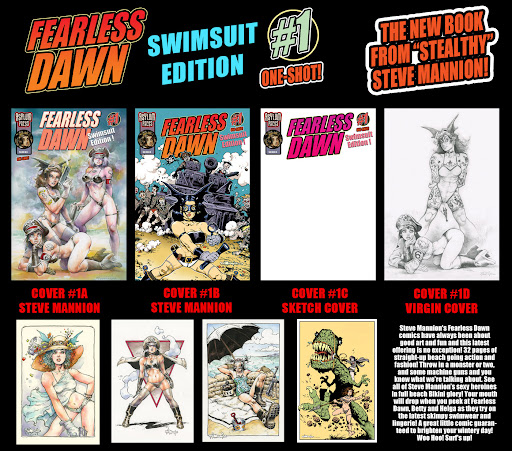 Hey Folks! We're back! Hyuck! Hyuck! ...Delivering this ONE-SHOT ISSUE of FEARLESS DAWN'S "SHORTS". Featuring five all-new short stories and 30 pages of content! All your favorite Fearless Dawn Universe characters re-enacting SHORT STORIES from history, legend, and folklore...  in “RUN” we FREAK-OUT as Fearless Dawn encounters some ghouls and ghosties from the Haunted Devils Den!!! Colorfully rendered in ink, marker and watercolors and displayed in beloved comic book format. In “General Mud” FD defeats every army in sight! FLIP THE EVER LOVIN' MUTHA OUT!!!-When you witness “Jack the Ripper” meeting his match!!! Dinosaurs, zombies, monsters and sexy gals permeate this tome of comic goodness!  In ”FIGHT” Fearless dawn takes on her arch-nemesis Helga again for a duel to end all duels!! A MASSIVE AMOUNT of comic book fun coming at you from Asylum Press and comics creator, Steve Mannion. 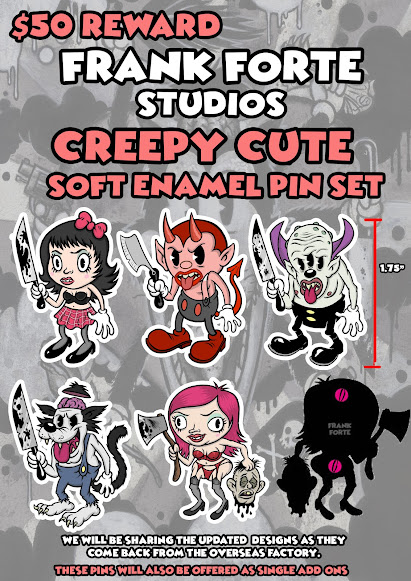 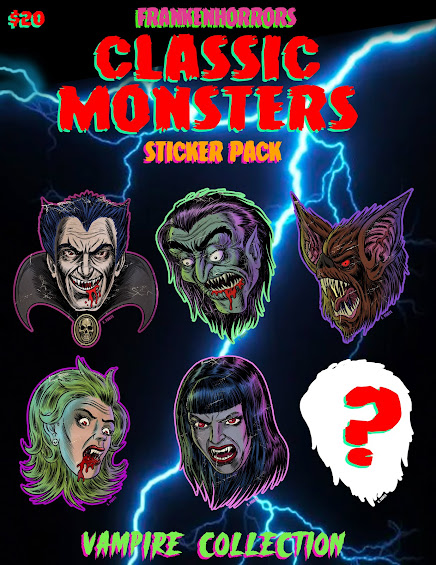 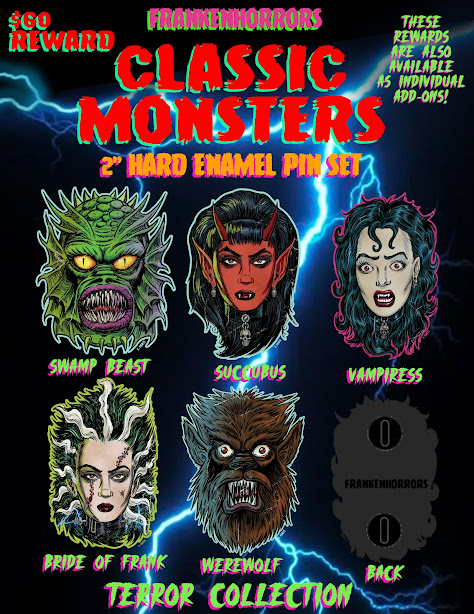 “We are excited to offer these great new titles to fans or horror and comics”, explains publisher anD creator Frank Forte, “but we are also trying to crowdfund a series of enamel pins and die cut stickers”

“When we go to conventions, we always get asked about enamel pins and stickers, so we brought a set of stickers, the Frankenhorrors Classic Monster set, to Comic Con International and Monsterpalooza and they were a big hit, so we decided to do a set of enamel pins based on the stickers.”

The Frankenhorrors set of enamel pins is a hard enamel pin set, which features Frank’s takes on classic monsters such as the bride of Frankenstein, a vampire, a werewolf, a succubus and a swamp creature.

Asylum Press is a Los Angeles-based comic book and graphic novel publisher. The company publishes high-concept books from the industry’s top talent within the horror, fantasy, and action adventure genres via a bold new business model that focuses on digital publishing and new distribution outlets in both the American and international markets. Its flagship titles include Fearless Dawn, The Bomb, Chopper, Black Powder, Warlash, and the popular horror anthologies Zombie Terrors, EEEK!, Asylum of Horrors, and Satan’s 3-Ring Circus of Hell. For more information, visit http://www.asylumpress.com. 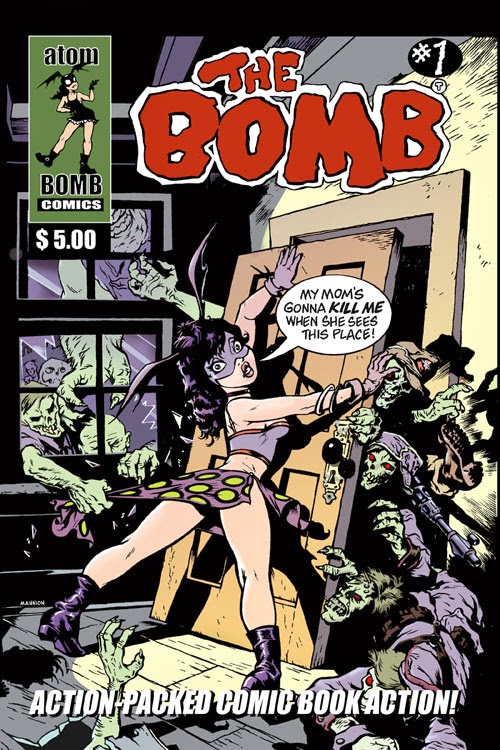 FEARLESS DAWN:SECRET OF THE SWAMP #1

FEARLESS DAWN:SECRET OF THE SWAMP 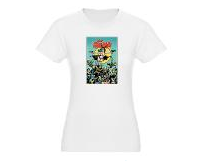